Hi everyone. I’m really glad that I finally launched this blog. Fun With Bits.

Special thanks goes to Peteris Krumins who shared some invaluable insights about blogging.

TL;DR: Bla bla bla about who I am. In this blog, I’ll talk about software development techniques, low-level hacks, game development, kernel, among other interesting topics I feel it’s worth sharing with my readers.

I don’t expect people to know me prior to reading my blog, so I’m going to introduce myself.

I think that my father (unfortunately, he’s no longer around us) is the main reason behind my interest in computers. When I was about 10 years old, he taught me how to use commands to interact with MS DOS. I remember the most important commands were to edit texts, execute programs, and navigate through the file system. I don’t know how many times I messed up with the operating system, making impossible to boot it. I had a lot of fun doing it though. After that, I was able to create my own websites using HTML and CSS. I didn’t even know what programming actually was at that time. I was just curious and wanted to do interesting things with my computer.

I actually started with programming after I got interested in creating my own alternative server for a MMORPG called Tibia. Of course, I didn’t create the server, but the experience made me learn how to host a server, manage my website and consequently a database which stored players' data, and also how to write scripts using LUA programming language for custom systems, like quests and spells.

At that time, I wasn’t even thinking of computer science as a career. I was just having fun with bits. Pun intended :-) But I changed my mind and joined a local university for a computer science degree. It helped me a lot because I wanted to be the best programmer among my peers. I worked really hard. A friend of mine a.k.a. kov introduced me to the open source world. He told me about the job opportunities I could get if I started helping relevant open source projects out there. IIRC, Linux kernel was the first open source project I contributed to. The change was to slightly improve the PID allocation code. I will not lie. It was extremely hard to find something to do, but the experience taught me a lot. I was really obsessed with kernel. I often found myself whispering the word ‘kernel’ while showing or walking down the streets. I wanted to better understand how computers worked, from boot to application initialization.

As I was gaining more experience, I contributed to other projects until I got my first job opportunity at an israeli startup called Cloudius Systems. It was working on creation of a project called OSv. In OSv, I worked with file systems. Mostly on improving ZFS support. I’m working for the same company, but now on creation of a distributed database called ScyllaDB.

I think I’m considerably better than myself of 5 years ago, but there’s a long way to go until I can say I’m really good with computers. By the time being, I’ll keep repeating this ZEN poem to myself: “To follow the path, look to the master, follow the master, walk with the master, see through the master, become the master.”

I’ll do my best to share interesting stuff with all of you. 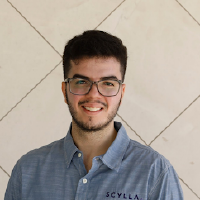